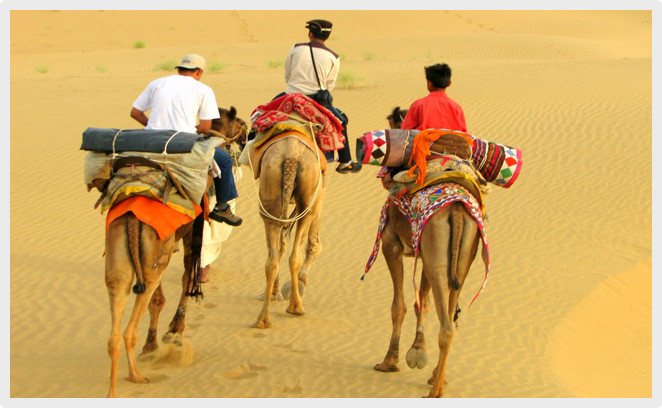 Bikaner in western Rajasthan is a tranquil desert location where tourists can admire the magnificent fort and enjoy leisurely camel safaris, while staying in hotels in Bikaner. Because it is away from the main tourist circuit of Jaipur, Jodhpur and Udaipur, Bikaner is ideal for a relaxed getaway. The exotic Karni Mata Temple nearby, makes for an interesting excursion, while holidaying at hotels in Bikaner. India Rajasthan Tours offers online booking for hotels in Bikaner.

Junagarh Fort
The fort was built by Raja Rai Singh, the sixth ruler of Bikaner who reigned from 1571 to 1612. Rai Singh had conquered part of Marwar and had been granted territory in Gujurat and Burhanpur by the Mughal emperor Akbar as a reward for his services as military commander. This, as well as funding from Jodhpur, enabled him to build the fort. Rai Singh held high rank in the imperial courts of both Akbar and his successor, Jehangir. During his imperial service he travelled extensively, giving him an appreciation of art and architecture. These ideas have been incorporated meticulously into the architectural style of Junagarh Fort.

Laxmi Niwas Palace: The Laxmi Niwas Palace is a former residential palace of the king of the former Bikaner state, Maharajah Ganga Singh in Bikaner in theIndian state of Rajasthan. It was designed by the British architect, Sir Samuel Swinton Jacob in the year 1902. The style of architecture isIndo-Saracenic. It is now a luxury hotel owned by Golden Triangle Fort & Palace P. Ltd. The magnificent structure in red sandstone is one of the most popular destinations for tourists in Bikaner.

Lalgarh Palace: It was built between 1902 and 1926 according to Rajput, Mughal and European architectural styles. The building was commissioned by Maharaja Ganga Singh (1889 - 1925) in memory of his father Maharaja Lall Singh and was designed by the British architect, Sir Swinton Jacob. It is coated in red sandstone and has several grand halls, lounges,cupolas and pavilions. The building features magnificent pillars, elaborate fireplaces, Italian colonnades and intricatelatticework and filigree work. The palace houses the Shri Sadul Museum as well as the fourth largest library in the world. Though the Bikaner Royal Family still live in the palace, part of the building has been converted into a Heritage hotel operated by the Royal faimly of Bikaner.
Moolnayakji: Constructed in 1486, Moolnayakji was the first Vaishnav Temple built in Bikaner. It was the principal seat of the Vaishanv sect. The first of the Bhagavad Katha Vachaks of the Rattani Vyas clan of Bikaner Shri Rattoji Vyas gave the Bhagavad Updesh to the king, Rao Bika and his aide Salloji Rathi. This practice is carried on till date. The presiding deity is Lord Moolnayak Krishna.

Karni Mata Temple: The world famous shrine of Karni Mata can be found in the town of Deshnoke 30 km south from Bikaner on the road to Jodhpur. Karni Mata is worshiped as an incarnation of Goddess Durga. This temple is famous for rats which can be seen everywhere in the temple.

Gajner Palace: Gajner is an incomparable Jewel in the Thar. Built by the great Maharaja Ganga Singhji of Bikaner on the embankment of a lake with a generous dose of flora and fauna. Basically a hunting and relaxing lodge, the maharaja and the family shared their passion with their exclusive guests and hosted exotic holidays for them. Around the palace is a thick forestation that attracts the guests to take up a simple walk around admiring the migratory birds in winters like imperial sand goose,antelopes, black bucks and the animal species that wander around in the form of Nilgais, chinkaras, deers etc. The hotel is spread in a large area, and the ambiance around is as raw and authentic as it was before.