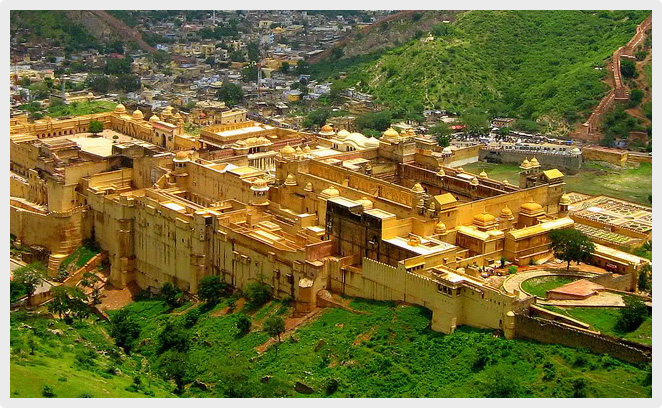 The colourful and intricately carved monuments are adequately matched by the lively spirit of fanfare, festivity and celebration of the people. Even today, one can find weather beaten faces with huge coloufrul trurbans, fierce moustaches and lips that spontaneouslya crease into a heart warming smile.

Jaipur Travel Guide - Old City ( Pink City ) :
It was during the reign of Maharaja Ram Singh that the city was painted pink and has been like that since then. The old city has a number of gates and is partially encircled by walls. The major landmark in this town is Iswart Minar Swarga Sal, near the Tripoli Gate, which over looks the city.

Jaipur Travel Guide - City Palace Complex
One of the most magnificent marvels of Jaipur is the City Palace Complex which has a rare combination of the finest blends of Rajasthani and Mughal architecture. In the heart of the old city, it has a vast area. The outer wall was built by Jai Singh and additions made up to the 20th century. Many buildings, well planned gardens and huge courtyards are a part of the complex. Just in front of the palace is the Mubarak Mahal / Welcome palace which was constructed by Maharaja Sawai Madho Singh II as a reception to receive his guests. Other places of interest include the Diwan-i-khas / hall of private audience and Diwan-i-am / hall of public audience and the peacock gate. There is also the Maharaja Sawai Singh II 's museum.

Jaipur Travel Guide - Hawa Mahal:
The palace of winds- a fascinating landmark of Rajasthan, was built by the ordes of poet-king, Sawai Pratap Singh in the 18th century and is most remarkably designed monument in Jaipur. This is a five storey building and is one of the major land marks of the city. Hawa Mahal / palace of winds were constructed in 1799. It was primarily constructed so that the ladies of the royal house hold can look at the market down. It is an example of excellent Rajput artistry. You can climb to the top now to have a look at the city below. It is a part of the City Palace.

Jaipur Travel Guide - Central Museum :
This Museum is in Albert hall in the Ram Nivas public gardens. They have exhibits like tribal ware, yogis in various positions, decorative arts, costumes and drawings. The other attractions in the city include the Modern Art Gallery and the Juneja Art Gallery. Museum of Indology has an excellent private collection of folk art objects, paintings done on rice, manuscripts, ornaments, fossils, clocks and currency notes etc. There is the famous Birla Narayan Mandir, Fort of Moti Dungri. Rajasthan has a lot of festivals which are also an attraction of the state.