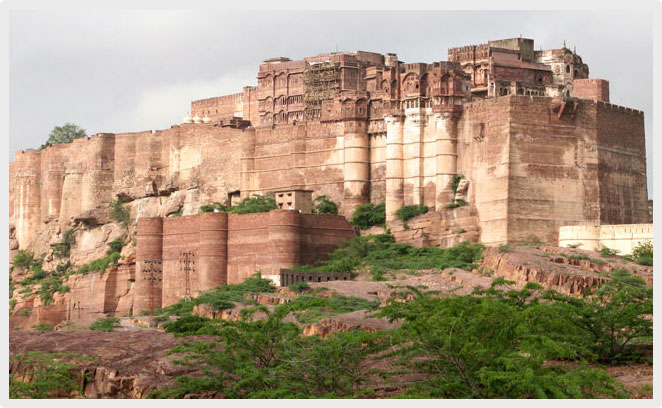 Jodhpur history revolves around the Rathore Clan. Rao Jodha, the chief of the Rathore clan, is credited with the origin of Jodhpur in India. He founded Jodhpur in 1459. The city is named after him only. It was previously known as Marwar. The city is known as the Sun City for the bright, sunny weather it enjoys all year. It is also referred to as the Blue City due to the indigo tinge of the whitewashed houses around the Mehrangarh Fort. Jodhpur lies near the geographic centre of Rajasthan state, which makes it a convenient base for travel in a region much frequented by tourists. The old city of Jodhpur is surrounded by a thick stone wall.

UMAID BHAWAN PALACE: The Umaid Bhawan Palace is not only one of India's most imposing palaces but also among its most recent. This lavish art deco monument to royal living had an improbable conception: it was built as a public relief and employment project during a long period of drought. Over one million square feet (90,000 m²) of the finest marble was used in the construction of the palace. A special type of sandstone, called Chittar sandstone, has been used in constructing the palace and this gives it a special effect. In 1977, the palace was segmented into the royal residence, the Heritage Hotel and a museum. It has total 347 rooms.It is the biggest private residence in the world, out of which 98 air-conditioned rooms are elegantly decorated with antique furniture as well as all the other amenities for a five star hotel.

MEHRANGARH FORT: The Mehrangarh Fort lies at the outskirts of Jodhpur city and is located atop a 125 m high hill. The magnificent Mehrangarh Fort (Jodhpur ka kila) is the most majestic and one of the largest forts in India. It was originally started (c.1459) by Rao Jodha, founder of Jodhpur. However, most of the extant fort dates from the period of Jaswant Singh (1638-78). The walls of the fort are up to 36 m high and 21 m wide; they enclose some exquisite structures. The fort museum houses an exquisite collection of palanquins, howdahs, royal cradles, miniatures, musical instruments, costumes and furniture. The ramparts of Mehrangarh Fort provide not only excellently preserved cannons but also a breath-taking view of the city.

JASWANT THADA: The Jaswant Thada is architectural landmark found in Jodhpur. It is a white marble memorial built in 1899 in memory of Maharaja Jaswant Singh II. The monument, in its entirety, is built out of intricately carved sheets of marble. These stones are extremely thin and polished so that they emit a warm glow when the sun's rays dance across their surface. Within this cenotaph, there are also two more tombs.

OSIYAN TEMPLES: The Osiyan city near Jodhpur, Rajasthan is an ancient city lying in ruins. It is approximately 65 Kms from Jodhpur. The main attractions of this city are its temples that have gracefully stood the test of time. They are beautifully designed and constructed. The main ones of the Osiyan Temples in Jodhpur are Jain Temples, The Sachiya Mata Temple, Surya Temple, Harihara Temple, Pippala Devi Temple, Shiv Temple and Vishnu Temple.

Explore the grand tourist attractions of Jodhpur such as the Mehrangarh Fort and Jaswant Thada while staying at hotels in Jodhpur.

Devi Bhawan Madho Niwas : If you were planning to visit Jodhpur and are looking for a cozy comfortable accommodation, then your hunt should end here. Devi Bhawan Madho Niwas is an ideal place to stay in especially if you are traveling with your family. This hotel in Jodhpur is located centrally, just a few kms. from the railway station and city center, and also enables to its guests to feast on royalty and heritage.

Polo heritage : Polo heritage, Jodhpur, is a building, which was designed by renowned architect, Gold Straw for Brig. Later it was gifted by HH Maharaja Hanwant Singh of Jodhpur to Lt. Col. Kishan Singh of Bahanwari as a wedding present.

Mapple Abhay : Located in the heart of the Jodhpur city Mapple Abhay is one of the finest hotels in Jodhpur. It is very closely located to the Umaid Bhawan Palace and Jodhpur Fort- just a handshake away from the glorious past. It is very easily accessible from the airport and railway station as well.

Park Plaza, Jodhpur : Jodhpur is fondly referred to as the Blue City of India. Owing to its historical significance, the city is still visited by millions of tourists every year, who come here also to taste a slice of royalty and grandeur.

Rawla Narlai : Rawla Narlai, Jodhpur in Rajasthan is an ancient 17th century fort and belongs to the royal family of Jodhpur. It is situated in Naralai Village in Ranakpur near Pali. Rawla Narlai's closeness to the dense woodlands in its close vicinity, makes it a perfect hunting lodge.

Umaid Bhawan Palace : This magnificent palace hotel is a landmark of in Jodhpur and it is regarded by many in the hospitality industry to be one of the world's most remarkable palace hotels.

Taj Hari Mahal : This quintessential Taj Hotel is located strategically in Residency Road area of Jodhpur and is set in the midst of six acres of beautifully landscaped gardens.

Ranbanka Hotel : The Ranbanka Hotel is ideally located at the Circuit House Road and provides breath taking views of the magnificent Mehrangarh Fort and the regal Ummaid Bhawan Palace.

Rohetgarh Fort : The majestic Rohetgarh Fort used to be the retreat of the Rathore royal family. The Fort is 375 year old and is located in a picturesque setting besides a shimmering lake.

Karni Bhawan Hotel : The magnificent Karni Bhawan is ideally located at Palace Road and in the days of yore, it used to be the abode of the Bhati Rajputs.

Ummed Hotel : The majestic Ummed Hotel is located in a sprawling 28 acres of greenery and is conspicuous by its majestic courtyard which is built in the traditional Rajasthani architectural style.