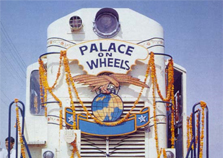 New Delhi : The journey of a lifetime begins at the Safdarjung Railway station, New Delhi where the guests are accorded a warm, traditional welcome before the Palace on Wheels pulls out into the night ... for a week-long luxury cruise through fascinating Rajasthan.

Jaipur: The first stop of Palace on Wheels is Jaipur, one of the most well planned cities of the world of its time. This capital city of Rajasthan, popularly known as the Pink City, was founded by Maharaja Swai Jai Singh II, in1727 A.D.
To explore the city, an air-conditioned coach takes you to Hawa Mahal or the Palace of Winds, which is a remarkable five storeyed building along the main street of the old city in pink splendor with semi-octagonal and delicate honey combed sandstone windows. This is followed by a visit to Amber Fort, eight kms. away, where rides on caparisoned elephants add to the ambiance.

After lunch at a Palace Hotel, you are off to the City Palace, home of the erstwhile royal family. Right across the road from the City Palace is the Jantar Mantar, the largest observatory built by the Sawai Jai Singh II. The Luxury coaches will take you back to Palace on Wheels around 6.30 pm. Dinner on Board.

Jaisalmer: In the heart of the Thar Desert lies Jaisalmer, founded by Rawal Jaisal, in 1156A.D. Here the yellow sandstone fort is an imposing sight, towering magnificently over the city. Discover the painstakingly latticed havelis or mansions with their grand facades. The Nathmalji-ki-haveli, Patwon-ki-haveli and Salim Singh-ki-haveli are fine examples of the stone carver’s skill.

Enjoy the dinner and the cultural programmes at a hotel in Jaisalmer.The train leaves for Jodhpur at night.

Jodhpur : Next morning the Palace on wheels is in Jodhpur, a city ringed by a high stone wall with seven gatesand several bastions. This second largest city of Rajasthan, founded by Rao Jodha in 1459 A.D. is known for its rock-solid Mehrangarh Fort. The grand palaces within- Moti Mahal, Sheesh Mahal, Phool Mahal, Sileh Khana and Daulat Khana are impressive examples of architectural excellence. Near the fort complex lies Jaswant Thada, and a group of royal cenotaphs made of white marble. After lunch at a royal Palace hotel, return to the Palace on Wheels.

Sawai Madhopur: One can almost sense a life of the wilderness, as the Palace on Wheels arrives in Sawai Madhopur, a city named after its founder Maharaja Sawai Madho Singh I. After breakfast a visit is arranged to the Ranthambhor National Park, wherein are located the ruins of a 10th century fort. This wildlife sanctuary is considered to be the country’s best for observing and photographing the activities of the tiger. The park, covering an area of 392 sq.kms. is home to more than 300 species of birds. The tiger, hyena, ratel, jackal and fox are among those constituting the carnivorous population here. Sawai Madhopur is known for its exclusive toys, ethnic ornaments and costumes. Upon return to the Palace on Wheels, you leave for Chittaurgarh, when one gets an opportunity to watch the colourful countryside passing by in the daylight.

Chittaurgarh: After lunch on board you are in Chittaurgarh. Images of love and valour; scars of battles lost and won….thrice-beseiged, Chittaurgarh Fort is all this and more.

Udaipur : Arrive in Udaipur, the Lake City at 7:30 AM. It was founded by Maharana Udai Singh of Mewar, after the Sisodia dynasty was driven away by the Mughals, in 1559A.D. Perhaps the two most beautiful sites of Udaipur are the dream-like marble Palaces-the Jag Niwas (Lake Palace) and the Jag Mandir, which appear to rise from the blue waters of Lake Pichhola. After lunch a visit to City Palace is exhilarating. In the evening visit the crystal gallery. Later proceed to Bharatpur on board Palace on Wheels

Bharatpur: Early next morning, the Palace arrives in Bharatpur, the capital of Maharaja Suraj Mal. After breakfastpay a visit to the world famous bird sanctuary, Keoladeo Ghana National Park, the nesting place of thousands of Egrets, Siberian Cranes, migratory Water Fowl and other species of birds

Agra: Arrive at Fatehpur Sikri-the red sandstone Mughal palatial complex. Within the enclosure is a mosque built by the Mughal Emperor Akbar and dedicated to the Sheikh Salim Chisti, a muslim Sufi Saint who blessed him with a son. After lunch move on from the Red Fort and arrive at the Taj Mahal, one of the seven wonders of the world. A pristine monument of undying love. It was built by Emperor Shah Jahan in memory of his beloved queen Mumtaz Mahal. Agra is known for its splendid marble inlay work like the Pietra Dura work on the Taj, leather goods and jewelry.

After dinner on board and a good night’s sleep, arrive at Safdarjung Train Station, New Delhi at 6.00 hrs the next morning and let the pleasant memories of the past week linger on your mind for a long, long time.